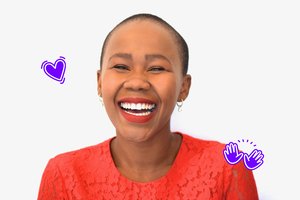 Getting HIV is not a death sentence. Meet 28-year-old Phindile Sithole-Spong. She was born with HIV and this hasn’t stopped her from achieving her dreams.

"The world has been taught for a long time that HIV looks like death. What I try to do is show people that HIV can be sexy and cute and funny… all the things that you don’t expect,” she says.

Here are 3 lessons from Phindi about living with HIV:

HIV is not a death sentence She found out at 19 years old that she was HIV positive. She followed medical treatment and 10 years later, she is living a full and healthy life.

It won’t stop you from achieving your dreams Phindi was named in the 2014 Mail & Guardian’s 200 Young South Africans list for her work as a social entrepreneur, speaker, writer and businesswoman. In 2013 she won a PICA award for an article she wrote for Elle Magazine. In 2010 She started a company called Rebranding HIV to help businesses teach their employees about HIV. She is also the co-host of a talk show called Rise which was shown on SABC 1.

Love and sex are still possible. Phindile got married in 2016 to a HIV negative man. Throughout her dating life, Phindi has been vocal about sex when positive. "Yes, you are HIV-positive, yes, this might change the fact that now you are not going to have unprotected sex but that doesn’t make you any less a man or a woman just because you are using protection," she says.

You are very positive and brave, that's a good thing

Don't worry about it the lord carry s you

Help! It feels like everything is out of control!

Life doesn’t always follow our plans, but where there’s a will, there’s a way